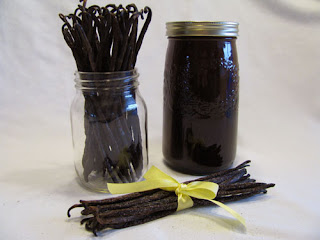 One of my favourite smells in the whole world has to be vanilla!  If you like to bake like I do, then I'm sure you've noticed the price of those tiny bottles of the "pure" vanilla extract.  Ok, you can buy the cheap "artificial" stuff but did you know that the cheap stuff gets its flavouring from a wood by product?  Ewwwwwwww!
I didn't start off looking to make vanilla extract.  Actually, I was looking at homemade yogurt recipes (I'll post about that later).  I came across this site with a homemade yogurt tutorial that also had a vanilla extract tutorial which got me intrigued.  It never occurred to me that you could make your own.

When I priced the beans at the grocery store, they were rudely expensive; 2 beans in a little plastic tube for $8.00!!  And who knows where they came from!  On the advise of another vanilla extract maker, I went to ebay where I found a great deal on beans.  This company called Vanilla Products USA has excellent prices.  Even after paying shipping it was much cheaper than buying from the grocery store. 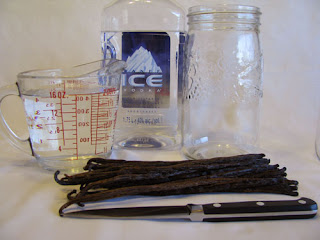 Items needed:
-Vanilla Beans (a minimum of 8 vanilla beans for every cup of alcohol) **(see note way down at the bottom)
- vodka that is clear, neutral with no flavour or heat.  I chose Banff Ice (rum can be used if you want the extra flavour)

(If you want to sweeten it add corn syrup, 10% by volume)

1.  The first thing you need to do is to determine how much extract you want to make and how many beans you will need.  I chose to make 5 cups for this batch, so I needed 40 beans.  I chose to use 8 beans*** per 1 cup of alcohol.

For a good quality pure vanilla extract you need to use a minimum of 8 beans per cup of alcohol.  If you use any less than this you are really only making vanilla flavoured alcohol and not extract.

When choosing your jar, make sure it will hold more than the desired amount.  For example, I used a 6 cup jar to hold my 5 cups of alcohol.  The beans will raise the level of liquid in the jar.
2.  Use kitchen scissors or a sharp knife to cut beans in half, then cut lengthwise down each bean to expose the seeds (caviar).  I like to leave an inch at the end still connected, but you don't have to.  If you are using a shorter jar, you can cut the beans into smaller pieces.


There's no need to scrape out the tiny seeds, because they'll come out to do their magic when you shake the jars. 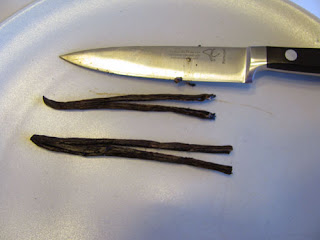 3. Put vanilla beans in your chosen glass jar or bottle.  I use a Mason jar.  Cover completely with the vodka, then give it a good shake.  Make sure the beans are covered with the alcohol or they will dry out.  Store your jar in a cool, dark place. 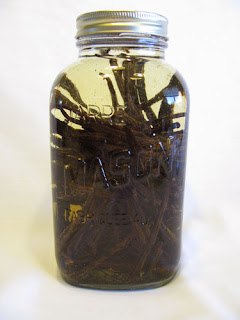 4.  For the first week, give the bottle a good shake once or twice a day. Let the vanilla steep 4-6 months before using, giving the jar a good thorough shake on occasion. The longer it ages, the more the flavour will mature, much like a fine wine. After a month of sitting you will notice the smell of the vanilla will be stronger.  The liquid will be slightly syrupy and the colour will be much richer. 5. Once you have decided it's ready to use pour ½ cup or so (straining with coffee filter is optional) into a small jar/bottle for regular usage. As you use this bottle top off on occasion with the larger jar. Once you have used half the larger jar, top it off with more vodka and occasionally add a fresh bean or two, giving it a good shake before each use. In this way your vanilla extract can last for several years. 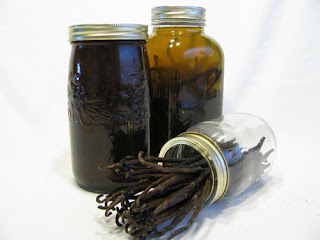 This picture shows a bottle of extract that is two weeks old, on the left, compared to the one made writing this tutorial, on the right. You can see how the colour gets richer as it sits. The alcohol will continue to extract flavour from the pods for up to 6 months, but will continue to mature for up to two years . It’s a good idea to make a good size batch initially and just keep a small bottle of extract in which you would just refill when needed. That way when you top off the larger bottle with more alcohol, you will be able to use the small bottle until the bigger bottle is ready.

You can make vanilla sugar by putting a split vanilla bean into a jar of white, granulated sugar. You can also put 1 dry bean (for 1 cup of sugar) in food processor and process until the bean is ground fine. Great way to infuse the sugar with vanilla flavour for baking.

Hello and welcome to my blog. My name is Debbie and I'm from Canada. I'm a homemaker, wife, mom, sister, aunt, niece and daughter. I'm a hobby crafter and like to make things to share with others. So, come join me and make something you can share too.